Overcoming overwhelm with the priority matrix

A simple and effective way of overcoming feeling overwhelmed is to use the priority matrix.

If you want to work through a priority matrix then come to the next IMPACT Goal workshop:

Sometimes life can seem too much…

You are inevitably going to come across hurdles on your journey to achieve your IMPACT Goals and these will affect your emotions.

It is possible to respond to strong emotions constructively, with emotional power.

As the Chinese Proverb says,

“When the winds of change blow, some people build walls and others build windmills.”

One way to do this is to learn to deal with strong negative emotions such as disappointment, frustration and sadness by taking time out to refocus and calm down.

This is an ideal way to deal with the emotions caused by mistakes.

It is likely that you feel overwhelmed at some point in time as you pursue your goals.

Having techniques to deal with overwhelm can allow you to manage this as quickly as possible, so that you do not waste time on it.

I find the simplest way of dealing with feeling overwhelmed is to make a list of what is overwhelming me.

Once I have written the list I decide what are my priorities and discard the rest.

I devote my time and energy to focusing on those priorities.

I first learnt about the Priority Matrix in Stephen Covey’s book, The Seven Habits of Highly Effective People. 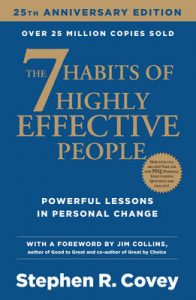 As with many personal development ideas, this one can be traced back to someone else.

In this case, it comes from a quote from an address that US President Dwight Eisenhower gave at the Second Assembly of the World Council of Churches in Illinois in 1954.

Eisenhower credited the idea to a former college president and acknowledged the challenge of prioritisation:

Dividing tasks in to Urgent and Important became known as “The Eisenhower Method”.

This is a useful though slightly more complicated way of dealing with being overwhelmed.

In the priority matrix, you draw two lines, one horizontal and one vertical across the middle of a piece of paper to create four boxes.

You label the upper boxes on the vertical axis as “Important” and the lower boxes as “Not Important”.

You label the left boxes as “Urgent” and right boxes as “Not Urgent” on the horizontal axis.

This gives you four boxes that you use as follows:

If you would like a template of the Priority Matrix, contact us at hello@impactgoals.com or using the button below: